Chikankari is the craft of Chikan work, often referred to as Lucknow Chikan. While the word Chikan quite literally means embroidery, the art form incorporates approximately 36 different stitching techniques. Traditionally it was done with white cotton thread on fine white Muslin cloth, however, today it can be seen on various fabrics and colours.

There are several theories associated with its origin in India. The most plausible one is that it came from Persia in the 17th Century when it was brought to the Mughal courts in India by Persian nobles. The Mughal Emperor Jahangir’s consort, Noor Jahan, was a talented embroiderer with a particular fondness for Chikankari work.  Jahangir was also enamoured by this craft and lavished it with his royal patronage. He established several workshops to hone and perfect this art form. In this era, the fabrics used were mostly Muslin or Mulmul as they were best suited for the warm, humid climate.

After the downfall of the Empire, Chikankari artisans spread all over India and founded various centres for re-establishment in the 18th and 19th Century. Lucknow was the main one with Awadh, a close second. The then Governor of Awadh, Burhan Ul Malk, was a Persian nobleman and Chikan work beneficiary who had a major role in restoring this craft to its former glory.

Due to the strong influence of Mughal aesthetics on this craft, intricate patterns of delicate flowers and trailing vines inspired by nature and architecture carvings, found their way in the embroidery designs and became a staple in Chikankari designs. The types of flowers (including their stems), Buti’s (buds and flowers) Paisley motifs and Jaali work, as well as their stylizations, have varied throughout time to keep up with fashion trends, but in general have remained fairly intricate and delicate.

Chikankari garments are not only refined and impossibly elegant, but also time-consuming process and laborious to produce. After much experimentation in stitch and style along with innovations in materials and fabric, PATINE has come up with a individual and unique point of view for our Chikankari collection. There are various stages in the creation of the garments and:

1) A design is first sampled with a silhouette/cut. Once the style/cut is approved It is then marked on fabric and cut. 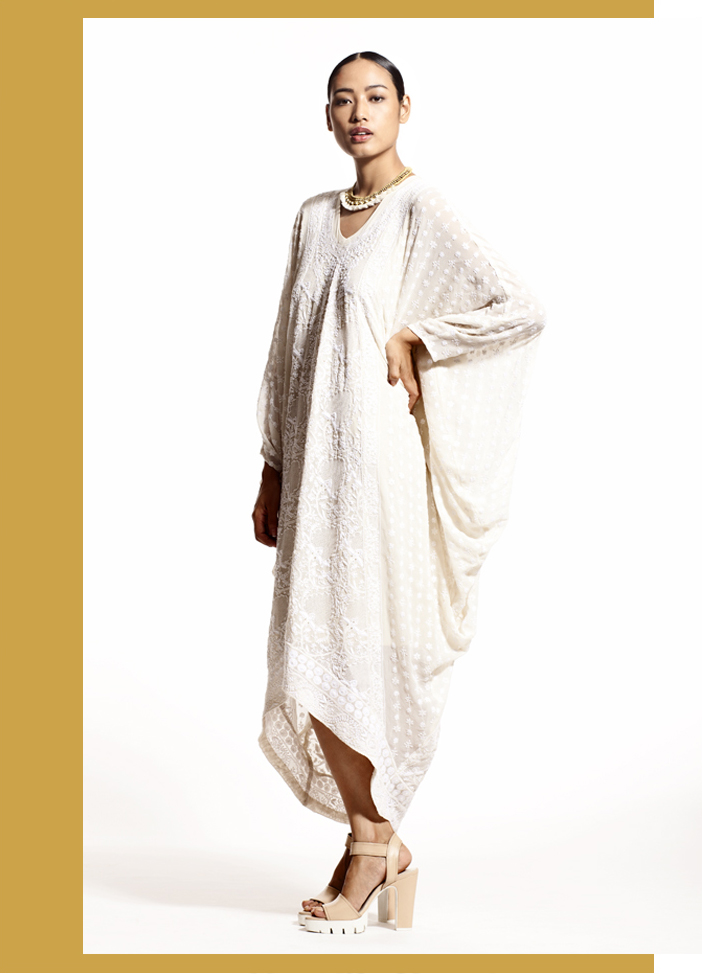 2) Then the cloth is block printed with blue dye in the pattern for embroidery. They also helps in highlighting the areas for different stitches.

3) Then, our highly skilled female embroiderers work on the fabric under the guidance of a supervisor. Three or four women handle each cloth, with each one focusing on a different stitch. There are three main types of chikan stitches—the flat stitch, the embossed stitch and the jaali stitch.

4) After embroidery, the fabric needs to be washed for several days to take out the blue dye of the pattern for embroidery. Once this is done, the embroidered fabric is finally be ready for stitching and shipped to the PATINE Atelier in Delhi. 5) At the Atelier in Delhi, the embroidered garment is further layered with embroidered highlights and borders, zari accents and trims, laces and edges, etc according to the design of the collection to create a unique and individual PATINE garment.